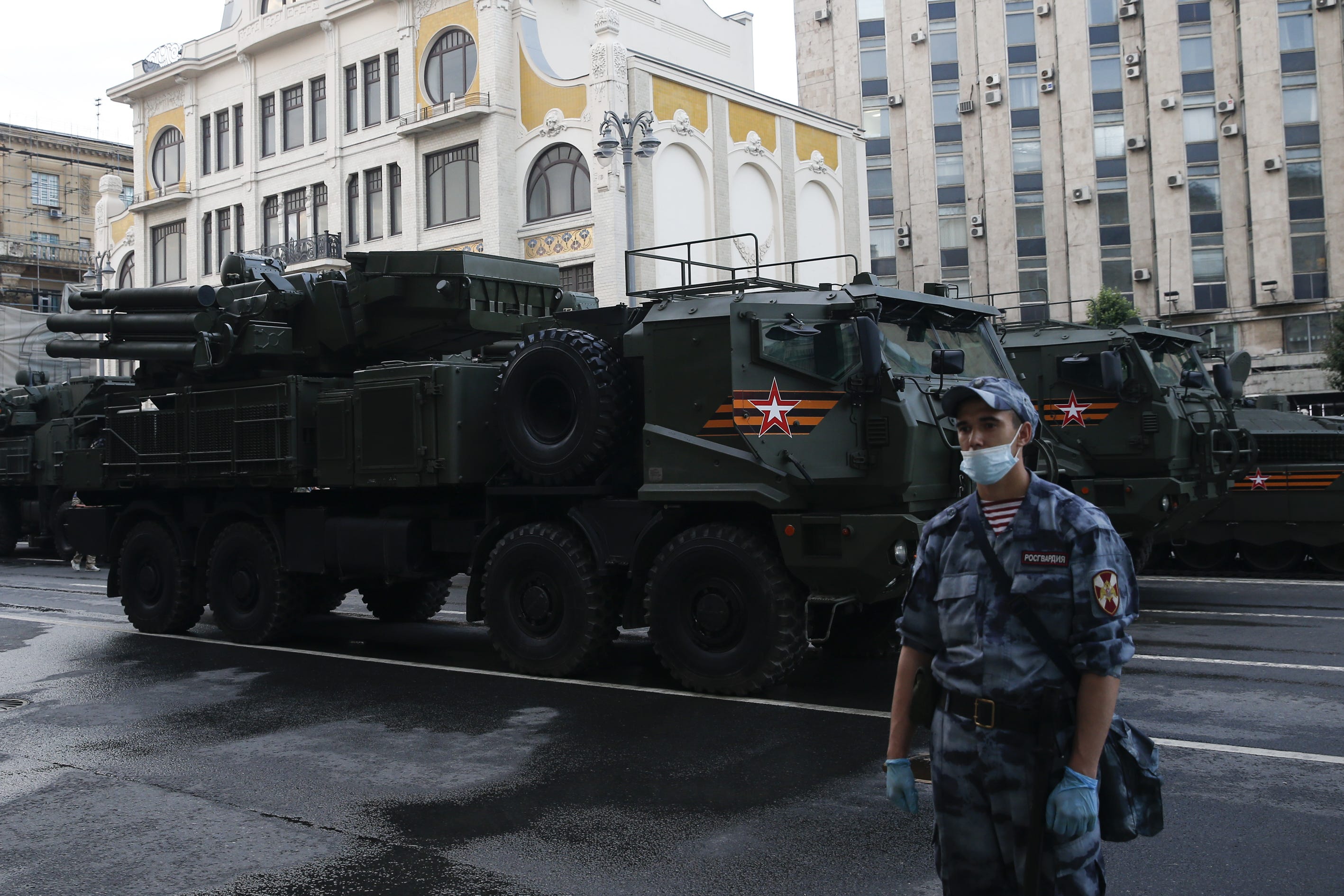 A Pantsir air-defense system moves along Tverskaya Street before a rehearsal of a military parade in Red Square marking the 75th anniversary of the Victory in WWII on June 18, 2020 in Moscow, Russia.

Anti-air missiles appear to have been installed on rooftops in Moscow, raising questions over whether the Kremlin is preparing to fend off an attack on the Russian capital.

Photos posted on Thursday by Russian military bloggers and Telegram channels show a Pantsir-S1 missile system on the roof of a building used by the Russian Ministry of Defense, about a mile from the Kremlin.

The footage, which Insider was unable to independently verify, has since been reposted several times on Twitter.

Meanwhile, several videos posted on the same day show a crane lifting a similar anti-air system onto a nearby building on Teterinsky Lane.

The Pantsir-S1 systems have an effective range of around six to 12 miles, and are used to defend against helicopters, aircraft, cruise missiles, and drone attacks. They are armed with twin 30 mm autocannons that have a maximum fire rate of 5,000 rounds per minute, as well as 12 anti-air missiles in launch canisters.

On January 13, Russia’s longer-range S-400 surface-to-air-missile systems were also seen deployed in photos posted by the anti-war Telegram channel CHTD. The images, which Insider was also unable to independently verify, show the systems installed in two parks near central Moscow.

The S-400 is designed to destroy aircraft and counter hypersonic weapons, cruise and ballistic missiles up to 250 miles away.

Prominent pro-Kremlin journalist Alexander Kots wrote on his Telegram channel that he saw the installations as a positive sign.

“It means that [the leadership] perfectly understand all the risks and understand that strikes against Moscow and the regions are just a question of time,” he wrote, per a translation by The Guardian. “It’s good to begin planning in advance instead of after the first strikes.”

Russian state media and officials have not addressed the new footage of the missile systems so far.

The new footage in Moscow also surfaced as NATO leaders were meeting in Ramstein, Germany, on Friday to discuss whether their nations will supply Ukraine with modern tanks to use against Russia’s offensive. Both Ukraine and Russia have largely relied on Soviet-era T-72 tanks in the war so far.

“Potentially, this is extremely dangerous, it will mean bringing the conflict to a whole new level, which, of course, will not bode well from the point of view of global and pan-European security,” he told reporters, according to Agence France-Presse.

Russia’s Ministry of Defense did not immediately respond to Insider’s request for comment.

Home » Shared Links And Posts - trumpinvestigations.net » Russians are posting footage of air-defense systems being installed on Moscow’s roofs, a sign the Kremlin may fear an attack
a