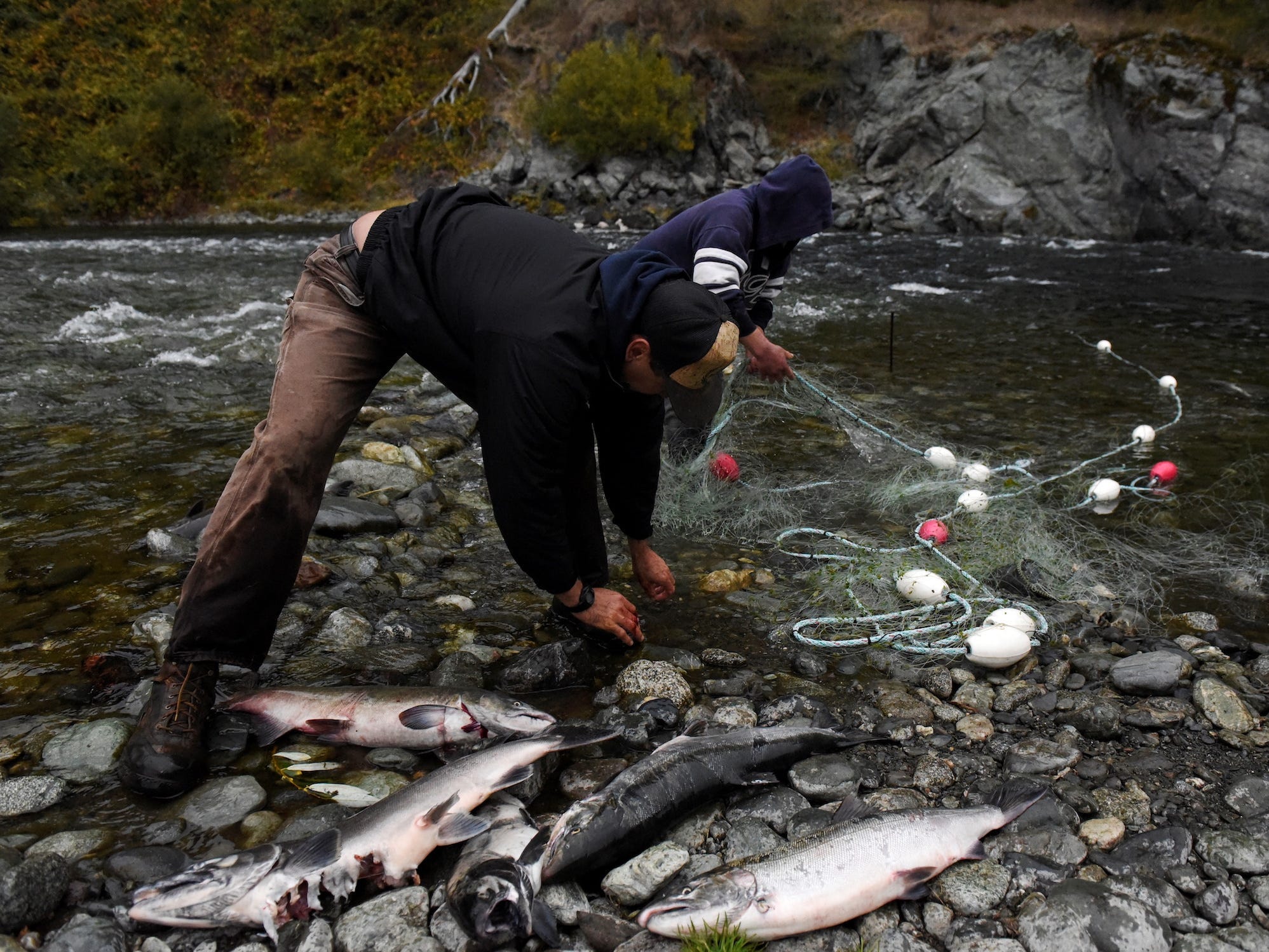 An uncle and his nephew fish for salmon with a net on the Trinity River on the Hoopa Valley Reservation in California.

Eating fish from a local lake or stream could give you a giant dose of hazardous “forever chemicals,” equal to nearly a month of drinking highly contaminated water, researchers have calculated.

Since their invention in the 1930s, per- and polyfluoroalkyl substances (PFAS) have multiplied and spread. Humans have created thousands of substances in the PFAS class, since their resistance to water and heat makes them useful in everyday products like food packaging and clothing.

But in recent decades, research has revealed that PFAS are harmful to human health. Peer-reviewed research has linked them to some cancers, thyroid disease, decreased fertility, developmental delays, liver damage, high cholesterol, and reduced immune responses.

What’s worse, PFAS only stick around and build up. They’re nicknamed “forever chemicals” because they don’t really break down. Now they’re in soil, food, water, clothing, and even the dust in your home. One recent analysis found that rainfall across the entire planet contains unsafe levels of PFAS.

So it’s no surprise that these substances have filled waterways across the US, where they can accumulate in the bodies of fish. Eating a fish can give you a concentrated dose of its entire lifetime of forever chemicals.

The problem is widespread across the US. The Environmental Working Group assembled a map, below, of the 2,858 locations where PFAS-contaminated fish have been documented. The instances span all 50 states and two US territories. 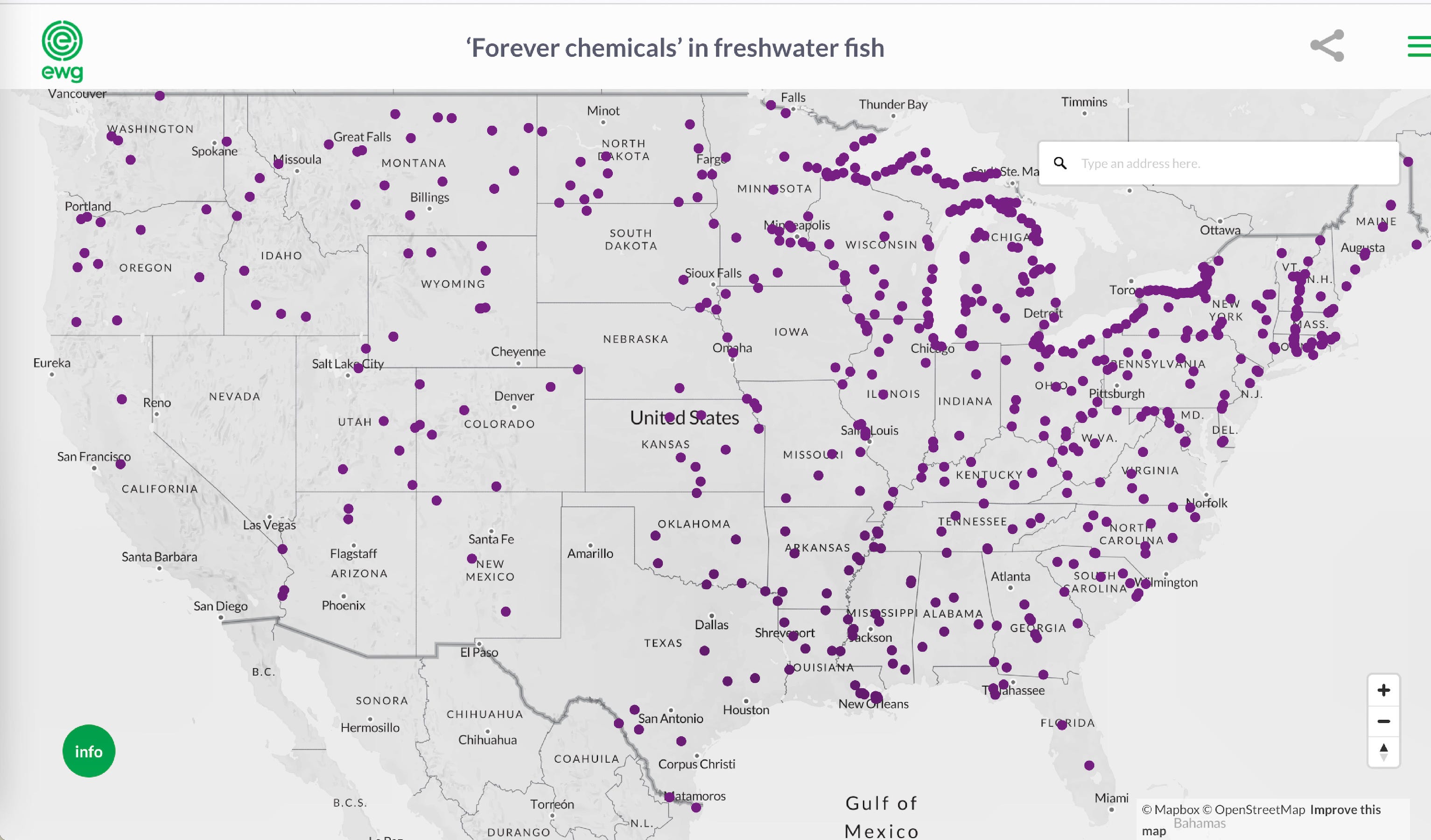 Locations where PFAS-contaminated fish have been documented.

An interactive version of the map on the EWG website contains details about each site.

The map is based on EPA data from 2013 to 2015, in which the agency tested over 500 samples of fish from freshwater sources across the US.

EWG researchers published their analysis of that data in the journal Environmental Research on Tuesday. They found PFOS — one of the most notorious substances — was the largest contributor to PFAS contamination in fish.

“To find this level of contamination in fish across the country, even in areas not close to industry where you might expect heavy contamination, is very concerning. These chemicals are everywhere,” Linda Birnbaum, former director of the National Institute for Environmental Health Sciences and the National Toxicology Program, told CNN.

PFAS are everywhere, making the planet ‘a bit inhospitable’

Some places have even issued advisories about PFAS contamination in fish, like Wisconsin in 2021, when the state warned people not to eat smelt from Lake Superior more than once per month.

But states don’t always detect or warn people about PFAS contamination in their fish. So taking your fishing pole to the local river could be riskier than you think.

“When we start to really worry about using our environmental resources, that makes me really angry and annoyed,” Ian Cousins, who led the analysis of PFAS levels in rainwater, told Insider in August.

He said he’s also seen PFAS contamination advisories for fishing spots in Sweden, where he lives.

“We kind of made the planet a bit inhospitable,” he added.

The new EWG study found that the median total PFAS level in freshwater fish was 278 times higher than that of commercially sold fish tested in the last three years. 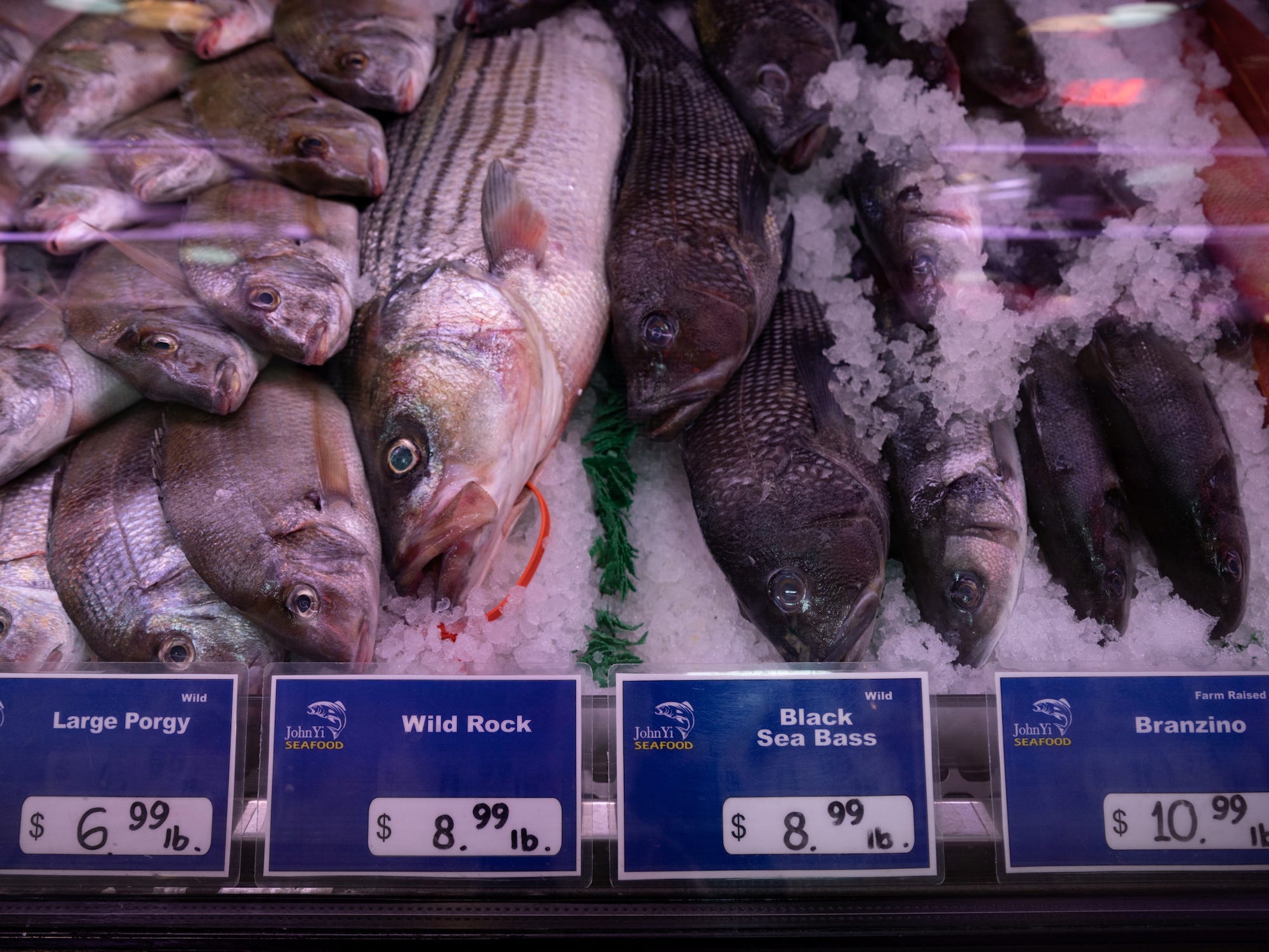 A fish market in Reading Terminal Market, in Philadelphia, Pennsylvania.

While avoiding PFAS altogether is probably impossible, it can help to know how to cut out little things that pack big doses — like certain fish in certain waterways.

Though the EPA’s stringent new guidelines for PFOS and its equally notorious cousin, PFOA, are not currently enforceable, the agency is working to clean up some of the country’s most contaminated drinking water.

The 2021 Infrastructure Bill designated $5 billion for that effort.

Home » Shared Links And Posts - trumpinvestigations.net » ‘Concerning’ map reveals where fish caught in the US are full of hazardous ‘forever chemicals’
a

Australia is walking a fine line between the US, which it relies on for security, and its important trade partner China as fears grow of a potential conflict in the Indo-Pacific. Defence and foreign affairs correspondent Daniel Hurst recently interviewed defence minister Richard Marles on Australia’s position in the global contest for power.